This Lonely Planet article gives readers some facts about wreck diving in Bermuda.

For as long as Bermuda has been on the map it has been infamous as a land of shipwrecks. A place that makes widows out of sailors’ wives and around which superstitious warnings swirl.

But the very thing that makes this Atlantic archipelago such a hazard for seafaring folk turns out to be a great boon for snorkelers and scuba divers, who flock to these blue waters to experience some of the best wreck diving in the world.

Bermuda’s penchant for ship swallowing can be largely explained by its position in the Atlantic Ocean. Think of the island as a giant pothole in the middle of a freeway. The Gulf Stream draws ships into her path, where Bermuda’s shallow reef effortlessly devours them. Add to that the occasional hurricane and it’s a pile up waiting to happen.

Back in 1505, Juan de Bermúdez was the first European sailor to brave the treacherous reef. He survived the ordeal unscathed but others were not so lucky. In fact, many of today’s Bermudans are descended from shipwreck survivors. The Sea Venture, which ran aground in 1609, is the Bermudan version of the Mayflower. Since then, more than 400 other vessels have suffered a similar fate.

The shallow water and remarkable visibility in the seas surrounding Bermuda make diving here an unforgettably vivid experience: a typical dive allows plenty of time to explore the coral encrusted hulls, barnacled cannons and holds populated with a kaleidoscopic array of parrot fish, barracuda and angel fish. The deck of some boats, such as the Taunton, a 228 foot Danish steamer built in 1902, lie just 10ft below the surface, an easy duck dive for even an average swimmer.

Diving the wrecks of Bermuda is also a lesson in history. Tragic and heroic tales abound in equal measure. One of the most popular dives is the Cristobal Colon. The 500 foot Spanish luxury liner (the largest wreck in Bermuda’s waters) was one of the fastest boats in her day. Her speed proved her downfall in 1936. A signal malfunction on shore meant the captain misjudged the channel and ran aground. A year later the 250 foot Norwegian freighter Iristo suffered an identical fate while trying to avoid her.

Bermuda has so many wrecks they are literally piled on top of one another. In spite of the rough weather, the sheer number of sites and strict marine preservation means that many wrecks remain remarkably intact. The most famous example is the Constellation, a 200ft schooner which was writer Peter Benchley’s inspiration for the film, The Deep. This ship was carrying building materials, medicinal drugs, and 700 cases of scotch whiskey to Venezuela when she went down in 1943. Among the hardened concrete bags, storm swells continue to unearth the occasional ampoule. 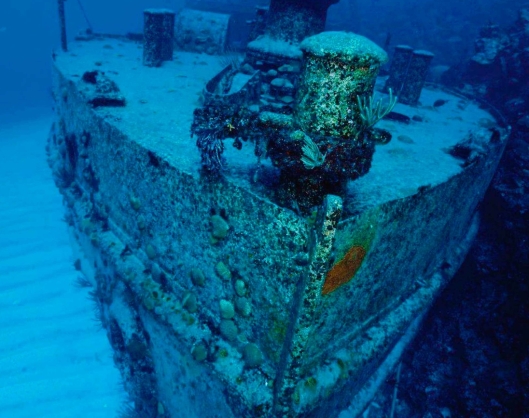 The San Pedro’s cargo was far more valuable. She wrecked in 1596 and lay undisturbed for hundreds of years. Local historian and marine archaeologist, Teddy Tucker (who runs the Bermuda Underwater Marine Institute) discovered the site in 1955 and unearthed many gold buttons, precious stones, chains and the famous Tucker Cross, an emerald studded crucifix made by Incan natives.

While many a fortune has been made scavenging the wrecks, it’s a pastime best left to the professionals. Not all that glitters underwater is gold: The Pollockshields, for instance, which sunk a century ago, is still laden with live ammunition and shell casings. But novices need not fear: local dive masters know how to best match the site to the prevailing conditions. Unlike the wretched sailors of old, there’s little chance of joining the remarkable display of marine archaeology in Davy Jones’ Locker.

John Jefferis is the owner of Coco Reef Resorts, a prime resorts destination located in Bermuda. Visit this Facebook page to find out more.

John Jefferis’ career started with an internship at the Savory Hotel in London. The things he had learned there fueled his interest in the field of hotel and resort management that resulted to successful resorts today such as the Coco Reef Resort.